Every device on the Internet has an address. An IP address is like a P.O. box. It’s located within a post office (the network) and directs incoming and outgoing messages to a person (the host). Hosts, like computers or printers, are part of a group of devices that communicate with one another.

You may have seen IP addresses before: 4 numbers separated by dots. Each number represents 8 bits, or binary digits:

In theory, we have 232=4,294,967,296 IP addresses — over 4 billion. But there are already over 4.66 billion people in the world who use the Internet, and many of them have multiple devices. As you might guess, we’re using up all the IP addresses — at least for this protocol, known as IPv4.

In practice, certain ranges of IP addresses are reserved. The example used above,

, is a private, or unroutable, IP address. Many devices in a home, for example, each have a private address but are all under one public address. Your computer also understands , or localhost, to mean its own IP address.

From 1981 to 1993, IP addresses were divided into five classes. Each began with different bits and could support different size networks.

With 16 million possible hosts on each network, Class A is used for massive networks: ISPs, Internet backbone.

Reserved for future use or research and development

Many organizations needed more IPs than Class C could provide, but didn’t use nearly as many as Class B offered. This become a problem especially during the dot com boom, as droves of people and companies went online.

The creators of the Internet anticipated the IP shortage. They developed network address translation (NAT), where multiple private addresses are placed under one public address. In 1993, they developed Classless Inter-Domain Routing (CIDR, pronounced cider), a less wasteful and more flexible system than the previous class-based one.

In CIDR notation, IP addresses are followed by a slash and a number, which tells you how many bits at the beginning represent the network. The largest blocks of IPs given to organizations are 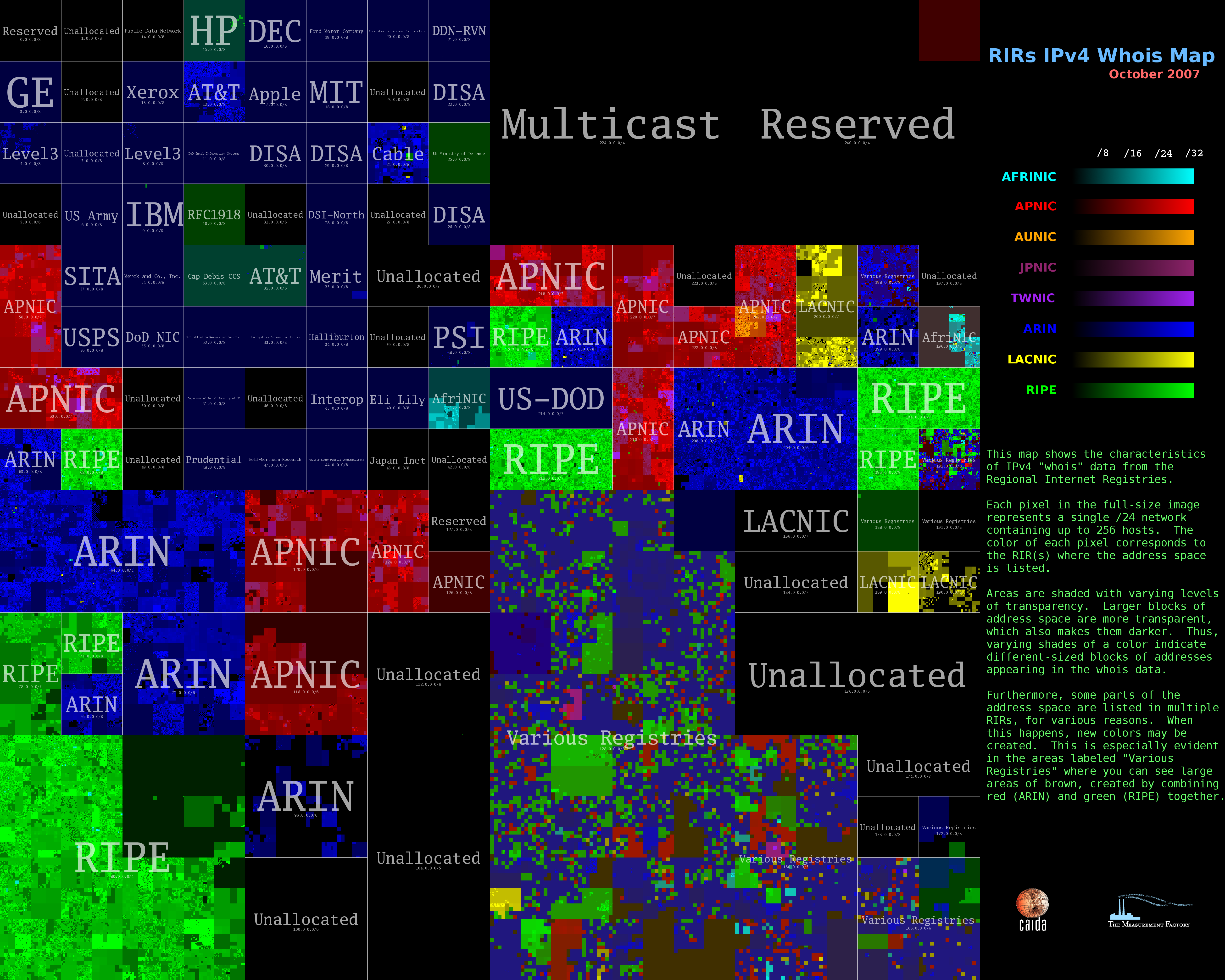 From the Center for Applied Internet Data Analysis: “Each pixel in the full-size image represents a single /24 network containing up to 256 hosts. The color of each pixel corresponds to the Regional Internet Registries where the address space is listed.”

Owners include various registries, the US Department of Defense, and corporate entities. Some ranges are also reserved.

The present and future of IPs

Many of the early pioneers of the Internet, such as universities, received huge chunks of IP addresses. Recently, as we’ve neared IP exhaustion, some organizations have sold their excess IPs. In 2017, MIT sold 8 million coveted IP addresses to Amazon for $200 million.